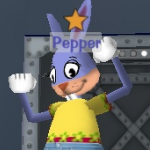 Hello guys! I'm Pepper, the Periwinkle bunny! I'm currently playing Toontown Rewritten and trying to max my toon. I love fishing and gardening (but sometimes I'm too lazy to do so). I finally got my Bossbot suit, so now I'm just chilling around, doing some VPs and CFOs.

Pepper is my first toon on TTR. She was created right after the Beta Release, when I had the opportunity to get a Playline spot! I almost broke into tears. I thought about bringing my old toon back, when I used to play on TT Brazil, but it's rewritten, so I thought "Why not try something new?", and Pepper was created.

I made my toontasks as fast as I could, so, on the beginning, I didn't stop to train my gags. When the playline was over, I started to work more on Pepper, so she would have gags that followed her laff... And it would not be that bad when I got to Cleff's Task. The first new track I got was Sound, mainly because there wasn't that many toons to work with. I had to do a lot of stuff on my own, so Sound would be better than Toonup.

The second track I got was Lure. On TTO, my toon was lureless, so I decided Pepper would have Lure. That was very hard to train on the beginning.

The third track was Toonup. I didn't want Pepper to be toonupless because of a personal choice, so Toonup was it. And now the game was already open, so more toons to toonup!

The last track was Trap. I decided to go Dropless by a personal choice. I really like both, but I had to choose one. So Trap was the chosen one! It was better to me because my Sound was way better than my Lure that time, so it was an opportunity to train my Lure (and to have one of the most powerful gag tracks!).

Little Brother is my second toon. He used to be an Orange Cat, but now he's Black! I named him like that because I thought it would be a cute name for a toon c:

Retrieved from "https://toontownrewritten.fandom.com/wiki/User:Pepper_The_Bunny?oldid=78570"
Community content is available under CC-BY-SA unless otherwise noted.