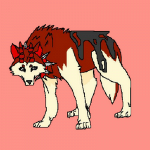 Hello there, my name is Libby. Well, I at least go by that. I'd rather not be called my full name, which is Elizabeth. You can call me Mewtastic or Oh Deer as well.

I love to draw, not too bad, but I'm not a literal pro. Hey, I'm still pretty good!

I am OBSESSED with Melanie Martinez. Any other Crybabies out there in TTR? (Tag, You're It is the best)

My toon, Mewtastic, had a toon rename, but was born on TTR with the name of Darling Muffin Hearts

I also had a toon rewrite, I am now Coral, but I was cream when I was Darling Muffin Hearts

I got my toon rewrite at 78 laff exactly

I hate milk (Unless it's in something, as in cheese, icecream, cereal, etc.)

I am better at drawing than all the kids in my class (I was last year, too)

I am way to obsessed with TTR

Doing flips and other tricks on bars

That's it! Talk to me on my message wall. Well, I don't wanna be bored! (Which is why I just asked to talk to me :P) So, good luck on the wiki! Get cool badges, and get more points! Not too hard, right? Right? Hmm?

Out of all honesty, I don't really know. Even if I did, I have no nerve to share.

Retrieved from "https://toontownrewritten.fandom.com/wiki/User:Muffinnn?oldid=81666"
Community content is available under CC-BY-SA unless otherwise noted.