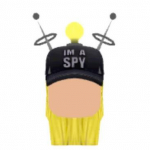 Revision as of 18:08, June 1, 2020 by CrownedJewels (wall | contribs)
(diff) ← Older revision | Latest revision (diff) | Newer revision → (diff)
|
1
Message Wall:CrownedJewels
Hello, I'm Jewels! I joined TTR back in 2015 under the name, Pepper Bagelcrunch. I've lost access to that profile as the email I used is no longer in existence, and in order to log in, I need to enter a ToonGuard. My new name is Rose! I love the color red and gardening is a hobby of mine, so it makes sense.

Retrieved from "https://toontownrewritten.fandom.com/wiki/User:CrownedJewels?oldid=102350"
Community content is available under CC-BY-SA unless otherwise noted.