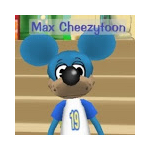 Hey there! I'm crazycarlos08, known as Max Cheezytoon and Maxine Cheezytoon in-game. I joined this wiki on October 18, 2015 to help out! I can help you out with anything I can. Here are some fun facts about me!

Max Cheezytoon is my first and main Toon on TTR. He's a tall ToonFest Blue Mouse who is Dropless. He almost always wears a white 19 shirt with blue sleeves, blue belted shorts and ToonFest 2015 Blue Shoes. I usually draw him with Mickey Mouse-like shoes and a tail. I haven't played as him in a few months in the hopes of building up my other Toon.

His canon profile, should he have one, would be often described as wacky and silly, who likes to take chances with his friends. He's a Toon Resistance rookie, hoping to rise up the ranks one day and fight the Chairman. He's also a very curious fellow, which could get him in trouble...

Max Cheezytoon spouting a few insightful words.
Add a photo to this gallery

Maxine Cheezytoon is my alternate Toon who I'm currently building up. She used to be aqua until she got a Toon Rewrite of ToonFest Blue in 2015. She's a short ToonFest Blue Mouse whose outfit depends on what she wants to wear, although she normally wears an American Flag Shirt and Blue American Skirt with Heart Throbbers glasses, a blue tiara, a vampire cape, and Pink ToonFest Blue Shoes. She's currently halfway through the DDL taskline.

She's the younger sister of Max, who wants to prove herself as worthy of being able to fight Cogs off without help from her big brother.

Maxine Cheezytoon showing off her Toon Rewrite, making her ToonFest Blue.
Add a photo to this gallery

Retrieved from "https://toontownrewritten.fandom.com/wiki/User:Crazycarlos08?oldid=101213"
Community content is available under CC-BY-SA unless otherwise noted.