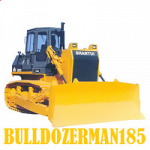 Dusty Bumblejinks is a young adult, tall, crimson red dog Toon, and a self-proclaimed resident superhero of Toontown Rewritten. Humble, brave, and with a strong sense of justice, he's battled the Cogs for over 10 years in an attempt to protect his hometown.

It is well known that he is the strongest among his friends, and is often the one who is called upon the most when trouble rises.

Sure to be the first one to step up to the plate when one of his friends is in trouble, he's not afraid to run in swinging when the time calls for it. He also enjoys pointing new Toons in town in the right direction, giving them advice on how to easily progress with the game.

He has recently applied to join the Toon Resistance, or moderator team, firmly believing that they are "Overworked" and need more staff to help moderate the town.

Dusty is generally mild-mannered, kind and good-willed toward other Toons, and extremely aggressive toward Cogs. However, step over the line, put one toe out of line, or break a rule, and expect to receive a rather lengthy lecture from him in return. He firmly believes in justice and good will, and will immediately report anybody who he sees breaking the rules. When around a loved one, such as a family member or a close friends, he lowers his guard slightly and becomes more friendly and sociable, as well as either extremely kind or affectionate, depending on his relationship with said individual. It is known that he has a habit of going out of his way to protect the ones he truly, or deeply, cares for, not caring for his own well-being. This seems to imply that he would rather sacrifice himself to save his closest friends, then allow them to fall in front of him. While this has gotten him into trouble more then once, he somehow manages to get out of trouble as quickly as he got in.

It is widely known that Dusty loves to taunt and insult the Cogs in order to aggravate them, as well as draw laughs from onlookers. Some of his most notable quotes to date are:

While there are a few others he may say, these are his most commonly heard quotes in the game.

Apart from insulting the Cogs, he does enjoy running through high level Cog invasions in Toontown Central, helping little Toons who are in trouble, as well as helping others train their gags.

Retrieved from "https://toontownrewritten.fandom.com/wiki/User:Bulldozerman185?oldid=76109"
Community content is available under CC-BY-SA unless otherwise noted.