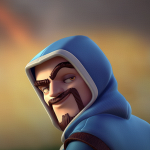 Hey there! My name is Brady and I currently head up Clash of Clans Wikia. However, that isn't the game we are talking about. I started playing ToonTown Online years and years ago, and last I can ever remember playing it was around 2010. I was unaware of the remake of ToonTown for quite awhile up until one of my friends from another game, The Legends of Pirates Online, mentioned something about ToonTown. To my surprise, he said that the game was remade under the name ToonTown Rewritten. I quickly hopped off and created an account for this game. Now here I am, playing the old game I used to play as a kid.

My first and main Toon, Brady is basically a recreation of my original Toon from ToonTown Online. I created him on the same day I found out ToonTown was back. My second Toon I created a couple weeks later. My original intention was to Uber him, but I decided to just use him as a regular secondary Toon. My goal next, once Rusty is leveled more, is to level up my uber, Meowi Wowi. I want to make my uber a 4-gag uber.

Throwback! A screenshot I found from TTO

My avatar used for my old Toon on the forums

My Toon before the name Brady was accepted 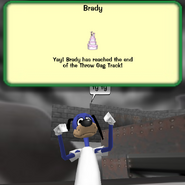 Brady maxing Throw during a VP 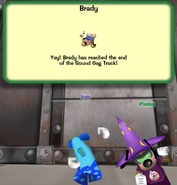 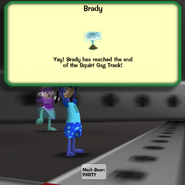 Brady maxing Squirt during a CFO 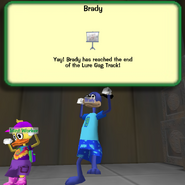 Brady maxing Lure during a Mint 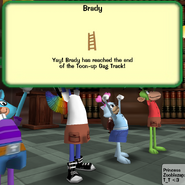 I was doing some digging around and found my old forums account that I had YEARS ago on ToonTown Forums. Feel free to check it out! The nostalgia is real... Click here to see my old forum account

I went to play at my cousins house and I saw him playing a weird game and I asked "Hey, what you playing?". He said that it's called "Toontown." and that it's a really fun game. I decided to try it out for a change. So, I made an account. I named my toon "Brady B.". When I first got on, I was wondering a lot of things on what to do. I was think "How do they jump around like that?". I went to look at the fountain in Toontown Central and I accidently walked in. I didn't read the rules about Toontown so I had no idea how to jump out of the fountain. I kept yelling "Help!" in the speedchat phrase. All around me I saw "woof, meow, arf, etc.." I was wondering why are they so foolish. Back then I didn't know that you had to get chat to see what they were saying. When I clicked on them, I didn't know that I could press "Go To" to get out of there. I finally figured out that CTRL was the jump button so then I got out.

Well, to start things off..... Brady B. is a 107 laffer, royal blue dog, named "Brady B". I have been on Toontown for a long time, I think since 2006 or something like that... I have made many friends and lost many friends. I love to be helpful and let others know that. I have all of the suits. I think the easiest boss is the CFO. I say that because all you do is defeat some cogs, then throw goons at the CFO.... but I get mad when toons keep throwing safe's at the CFO when he already has it off his head. The hardest boss I think is the VP because when you get him down farther he goes up when you don't attack him. The maxxed gags I have are: Throw Track, Squirt Track, and Sound Track. The gag track that I left out is "Trap". The gag I wish I didn't have was "Drop". I wish I traded trap for drop. I never use drop and it always misses.

Retrieved from "https://toontownrewritten.fandom.com/wiki/User:Brady55?oldid=89382"
Community content is available under CC-BY-SA unless otherwise noted.