"Which face would you like to defeat you?"
―Two-Face

Two-Face is the sixth Cog on the corporate ladder of the Sellbots. They normally range from level 6 to level 10; however, they can exceed level 10 in Sellbot Field Offices.

Below are Merits required to obtain every promotion for each Two-Face level of the Sellbot Cog Disguise.

"Two-face" is a term used to describe someone that has multiple personalities; for example, they may act differently depending on the setting, or hide their opinion about something. The definition is correspondent to a "backstabber". 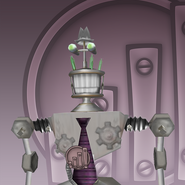 A Two-Face Skelecog.
Community content is available under CC-BY-SA unless otherwise noted.
Advertisement