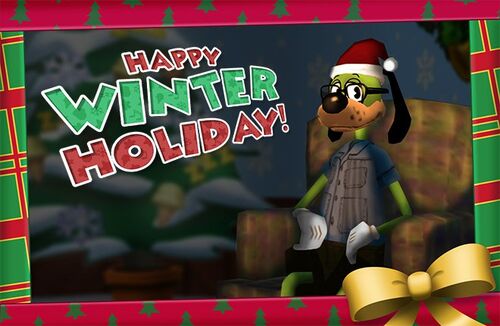 Toontown's Twelve Days of Winter, otherwise known as the Winter Holiday or simply Christmas, is a special holiday event where Toons celebrate the winter season of gifting and bringing joy. From December 15th to December 26th, a blog post is posted on Toontown Rewritten's website introducing a Winter Holiday update for the remainder of twelve days. The event itself occurs every year from December 16th to December 30th.

On the twelfth day of winter, Toontown gives to you:
The Great Snowball Fight,
A Christmas down in history,
Calm before a storm?,
Red-nosed reindeer Toons,
Twice your battle experience,
Cheerful Christmas costumes,
White winter wonderlands,
AND A MEGAAAAAA COG INVASION!
(bum bum bum...)
Lots of caroling Snowtoons,
Brand new winter music,
Festive decorations,
And an update to make your holidays brand new!

Toons receive a new cattlelog featuring all sorts of winter-themed items, including clothing, accessories, furniture, and garden supplies. Once the event is over, all these items will no longer become available in the cattlelog until the next event, but will still appear in the backorder.

Aside from Clarabelle's Cattlelog, two new special outfits can be obtained through codes where a Toon may dress up as Santa ("coming-to-town") or as an elf ("on-the-shelf").

Caroling is a special activity that Toons can participate in to earn a Snowman Head by picking up a special ToonTask from Snowman in Toontown Central. The ToonTask is to sing a specific carol from the "Winter" section of the SpeedChat menu to a Snowtoon found somewhere among other playgrounds. After singing a carol to all five Snowtoons, the Toon must return to Snowman to obtain their Snowman Head.

On December 21st, Toons may visit Holly Daze in The Brrrgh to complete a ToonTask for a special accessory called Santa's Bag. Deer can also obtain a special red nose from said ToonTask.

As a gift from the Toon Resistance, Lord Lowden Clear announces double experience that lasts from December 23rd to December 25th.

On December 24th, Doctor Surlee offers a special Christmas miracle for bears who speak with him near the Toon Headquarters on Tutorial Terrace. This can only be done by creating a new Toon.

The Great Snowball Fight is a special activity where Toons may throw snowballs at one another by collecting them from piles of snow, which can be found in all playgrounds. Since 2013, Slappy introduced this event that would become an annual tradition for the Twelve Days of Winter that would begin on December 26th.

This time of year is when the Cold Callers love to invade Toontown at an attempt to sell their products with an aggressive marketing campaign. On December 19th, Version 2.0 Cold Callers unleash a Mega-Invasion that lasts up until December 21st.

A Toon using the Christmas gags.
Add a photo to this gallery
Retrieved from "https://toontownrewritten.fandom.com/wiki/Twelve_Days_of_Winter?oldid=99794"
Community content is available under CC-BY-SA unless otherwise noted.