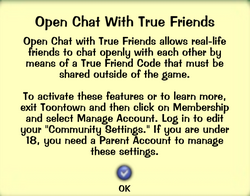 A true friend, commonly abbreviated as "sf" or "tf", is a feature that allows a Toon to communicate with another Toon without obeying the whitelist for SpeedChat+. This feature in Toontown Rewritten was once only available to a select group of staff members, but it is unknown if that is still the case. In many scenarios, such as the AMA livestream on February 15, 2016 hosted by "ToonDuos", the team discusses how true friends will most likely never be implemented due to moderation issues.[1]

In the event that true friends are implemented, one of two Toons must select "True Friends" in the Toon menu after clicking on their partner, followed by the "Generate a True Friend Code" button in the window that shows up on screen. They then will generate a code that will appear in the window. The code must be shared in real life or through a website that allows online communication, such as social media and Discord. The other Toon, after receiving the code, must also select the "True Friends" by clicking on their partner or another Toon, and select "Register True Friend Code" in the window. They then need to enter the code in a box that shows up and click the "Submit" button. If the code is real, the two Toons will appear on each other's friend list if they were not regular friends already and will appear at the top of the friend list. The name tags of the two Toons will also appear blue on each others' screens. Once being true friends, the two toons can communicate with each other privately without a chat filter in place.

Retrieved from "https://toontownrewritten.fandom.com/wiki/True_friend?oldid=100185"
Community content is available under CC-BY-SA unless otherwise noted.