Trolley Tracks is a unique Trolley minigame. It can be played by two to four Toons.

Trolley Tracks is a way for Toons to select their favorite Trolley minigames, but they must compete to get their desired minigame. When entering Trolley Tracks, there must be two or more Toons on the Trolley and must be played during Thursdays or Silly Saturdays.

Each Toon gets five votes in the first round of Trolley Tracks. They must spend their votes according to which way they want the Trolley to move either up or down. Votes are tallied and the direction with the most votes wins. Each Toon has a Trolley minigame on the board that will award them with a number of jellybeans, although it is not mandatory to select that specific direction. If the votes on the direction end up in a tie, the Trolley will move in any direction randomly. 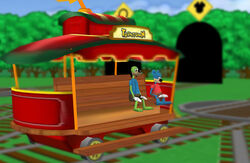