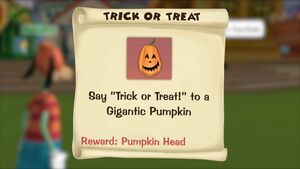 Trick-or-treating is a special activity that occurs during Halloween where Toons say "Trick or Treat!" to five of Jack O' Kazam's pumpkins and earn 200 jellybeans per pumpkin after grabbing a limited-time ToonTask from the wizard himself in Toontown Central. Upon revisiting Jack O' Kazam, he awards Toons with the final set of jellybeans and their own Pumpkin Head.

Two Toons wearing a tall and a short Pumpkin Head.
Community content is available under CC-BY-SA unless otherwise noted.
Advertisement