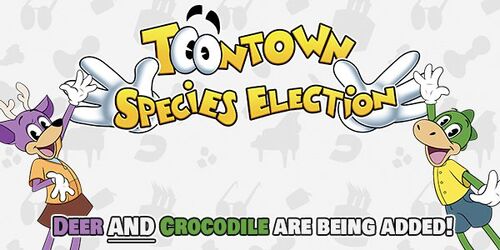 The Toontown Species Election was an event hosted by Alec Tinn to elect a new Toon species, which lasted from September 19, 2016 to July 28, 2017. The event was first announced at OMG!Con 2016. On September 1, 2017, deer and crocodiles officially arrived to Toontown.

Because ToonFest 2016 delayed on its original start date, which is September 19, 2016, the nomination stage for the election occurred on the same day to continue the ToonFest celebration.[1] Players could place a nomination on a species of their choice, and the top eight species would be chosen to battle in the first round of voting. Nominations ended on October 1, 2016.

The top eight species were announced as goat, crocodile, chicken, fox, parrot, chipmunk, cow, and deer. From December 17th to December 24th in 2016 as part of the Twelve Days of Winter, blog posts introduced each of the top eight species, along with their very own portraits and a simple biography.[2]

On March 1, 2017, the first round of voting commenced where players could select a first, second, and third choice of whichever species they wanted to vote.[3] Voting ended on March 11th.

Deer and crocodile were announced on July 15, 2017 as the two last standing candidates where players could select either one of the two up until July 22nd.[4] 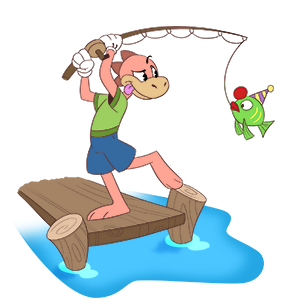 During the main ToonFest panel of ReplayFX 2017 on July 28th, it was announced that both deer and crocodile won. Despite deer being the true winner with 7,100+ votes compared to crocodile with 6,700+ votes[5], the Toontown Rewritten Team apparently decided sometime before announcing a winner that they would implement both species to the game. ReplayFX attendees had a chance to playtest both species, along with parties, fixed racing, and Grand Prix, all of which were planned to be included in the then upcoming 2.0.0 update that was released on September 1, 2017.