Toontown Rewritten, commonly abbreviated as TTR, is a MMORPG based on Disney's defunct Toontown Online. The game is not affiliated with The Walt Disney Company, but instead created by a dedicated team of volunteers who have devotedly recreated Toontown Online. The game is entirely free and does not contain subscriptions, advertisements, donations, or any other forms of revenue.

The game takes place in the fictional world of Toontown, a wacky and colorful town that is inhabited by skeptical-silly cartoon characters known as Toons. However, it is not all seltzer and slapstick in Toontown. A band of corporate robot Cogs are trying to suck the fun out of Toontown. Luckily, the Cogs cannot take a joke. To take back Toontown, Toons use their arsenal of gags to defeat the Cogs.

Prior to Disney's announcement on August 20, 2013 that Toontown Online was near its end, two of Toontown Rewritten's widely known founders, Joey and Jeremy, discussed amongst each other about a potential revival of the game and "ToonPulse" became the internal name for the project. Moments after Toontown Online closed the same year on September 19th, the newly-established band of players known as the "Toontown Rewritten Team" announced the project under the official title Toontown Rewritten. On October 3rd, Joey introduced a contest for players to submit their best knock-knock jokes, and winners received an Alpha key.[1] The team's seemingly impossible task of reviving Toontown soon became a reality.

On October 28, 2013, Toontown Rewritten entered the "Alpha" stage, and allowed a small amount of Alpha testers to enter the game. Players who had access to an Alpha key could enter the game.[2] The game eventually moved into "Beta" on May 17, 2014, but players that had either obtained an Alpha key or a Beta key were able to play.[3]

On June 2, 2014, Toontown Rewritten entered a "Semi-Open Beta" stage, which was announced in celebration of the 11th anniversary of Toontown Online.[4] Semi-Open Beta allowed all players to enter the game, but players who did not have a Beta key were restricted to the amount of playable time; in addition, they would also have to wait in PlayLine queues or book PlayTime slots in order to access the game. Rare Beta key ToonTasks were available in the game that would award a Beta key sent straight to the player's account page on the Toontown Rewritten website upon completion.

On August 20, 2014, just one year after the initial announcement from Disney about Toontown Online's closure, Toontown Rewritten announced that they would open the game to all players and celebrate their first anniversary with a grand opening of the first in-game ToonFest event on September 19th.[5]

On April 18, 2015, Toontown Rewritten announced that they were heading to Owensboro, Kentucky to host their first ToonFest convention at OMG!Con on June 11th in celebration of Toontown Online's 12th anniversary.[6] Ever since then, ToonFest became an annual tradition for players to meet the Toontown Rewritten Team and celebrate Toontown with all sorts of fun activities and events.

After dedicating several years of development while transitioning from Alpha to Beta, Toontown Rewritten released a major update on September 1, 2017 that concluded the long-lasting Beta era.[7] From that point forward, Toontown Rewritten has continued to release occasional updates in an effort to make Toontown the best it can be.

Toons are the main protagonists of the game and the inhabitants of Toontown. They are animals that take the form of cartoon characters. Toons use gags to battle the Cogs and make other Toons laugh. Players can create their own Toon and complete various sets of missions known as ToonTasks to obtain rewards such as higher laff limit, new gag tracks, jellybeans, special cheesy effects, and more. Toons come in a variety of species that include dogs, cats, rabbits, ducks, horses, pigs, mice, bears, and monkeys. New species that came to Toontown are deer and crocodiles.

Cogs are the main antagonists of the game and evil business robots trying to take over Toontown. They were originally created by Gyro Gearloose intended to help the Toons of Toontown, that is until Scrooge McDuck visited Gyro's lab and activated a particular robot by connecting its wires incorrectly, causing the robot to malfunction and order the Cogs to invade Toontown. The Cogs then invaded Toontown during the Toon Council Presidential Elections, saddening the newly-elected president, Slappy. Since then, Flippy was elected to become temporary president of the Toon Council and invested an ongoing effort with the Toon Council to search for Slappy.

Beginner Toons start with two gags: the Cupcake and the Squirting Flower. A Toon can unlock a new gag by earning skill points; each gag can be purchased from Goofy's Gag Shop for one jellybean; this excludes level seven gags which are the strongest gags in the game that can only be earned by gaining skill points. Gag tracks are selected throughout the game: the first option being either Sound or Toon-Up in Toontown Central; the second option being either Lure or Drop in Donald's Dock; the third option being either Trap, Toon-Up or Sound (whichever was not selected in Toontown Central) in Minnie's Melodyland; and the final option being one of last two gag tracks that were not previously selected in The Brrrgh.

A ToonTask is a task in which Toons can complete to progress through the game. A ToonTask can be offered by visiting any shopkeeper or HQ Officer and selecting a ToonTask. Once a Toon selects a ToonTask, they must complete it before selecting another ToonTask. ToonTasks may involve defeating Cogs, delivering items or gags to shopkeepers, fishing, riding the Trolley, or calling Clarabelle. Once a Toon completes a ToonTask, they must visit the specified NPC shown on the ToonTask.

Toons can obtain "Just for Fun!" ToonTasks for additional rewards but are not required for completion and can be deleted at any time. There are also limited-time ToonTasks available for certain annual events which can only be completed during said events and expire afterward.

Fishing is an activity which can be used to earn jellybeans and add fish to a Toon's collection. As a Toon catches fish, they earn trophies and additional laff points. There are a total of seventy fish that can be caught. Several types of fishing rods can be purchased from Clarabelle's Cattlelog, beginning with the Twig Rod. Every playground and street contains a fishing pond for Toons to fish at. In some cases, ToonTasks may require Toons to fish for certain items.

On Wednesdays and Silly Saturdays, Toons can also play Fish Bingo to win extra jellybeans depending on the bingo mode.

Racing is a side activity located at Goofy Speedway where up to four Toons can race in karts on a variety of tracks to earn tickets, which can then be used to enter more races or upgrade their karts and add accessories. Toons can also earn trophies and eventually gain laff points from reaching certain milestones (such as 10 wins on a type of circuit, 100 races qualified). There are three different racing courses including Speedway Circuit, Rural Raceway, and City Circuit.

On Mondays and Silly Saturdays, Toons can compete in the Grand Prix to win massive amounts of tickets via a three-course tournament.

Gardening is an activity where Toons can start their own garden with a gardening kit at their estate. Toons can earn a total of four laff boosts from receiving gardening trophies. These trophies are rewarded when various flowers are planted. Toons may also plant up to eight gag trees, which increase the planted gag's damage by 10% (rounded up) and/or increase its accuracy. A Toon can begin to garden once they purchase their own gardening kit from Clarabelle's Cattlelog.

Golfing is an activity where Toons can play minigolf over a series of holes to earn laff boosts and golfing trophies. Minigolf is a side activity, and is not required in any ToonTasks to progress further in the game. Golfing can be played with up to four Toons at a time. Each Toon takes a turn to get their golf ball into the hole or until a limit of three shots over par has been reached in order to advance to the next course.

Parties are where Toons can come together to participate in various party activities and make new friends. Toons can host their own parties or visit other public parties by walking up to one of two Party Planners standing right beside the local party gate on any playground.

An estate is a Toon's land property that consists of six houses, a fishing pond, and a fishing bucket. A Toon's house is where they live, which has their name displayed above the house's front door.

Toons can adopt their very own pets called doodles by visiting the local Pet Shop from any playground. A doodle always lives at their owner's estate after adoption and from there, the Toon can train their doodle to max all sorts of tricks. Doodles can also assist in Cog battles by offering laff points to Toons after successfully performing tricks.

One of Toontown Rewritten's latest expansions introduces the Silly Meter, a device that tracks the silliness throughout Toontown. As Toons continuously participate in all sorts of activities, the Silly Meter will rise and eventually reach its peak of maximum silliness. Most, if not all, activities in Toontown such as defeating Cogs, taking over Cog Buildings, throwing a party, and playing a round of golf allow Toons to earn "Silly Points." When the Silly Meter reaches maximum silliness, all Toons across Toontown unlock a special reward called a Silly Team.

Toons can visit Toon Hall to grab a ToonTask from any Loony Labs Scientoon to obtain a Silly Reader that allows them to keep track of their own Silly Points and Toontown's global silliness.

Players who stream Toontown on Twitch or YouTube are known to host Q&A sessions with various Toontown Rewritten staff members. 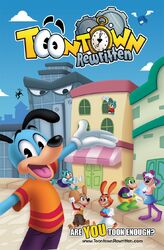 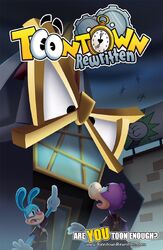 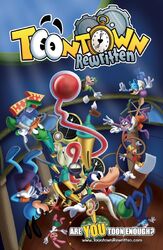 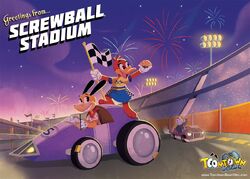 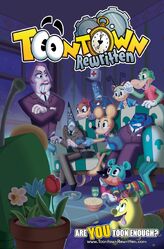