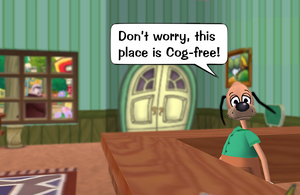 The Toontorial, otherwise known as Tutorial Terrace, is an area in Toontown Central where the player's Toon meets up with Tutorial Tom after being created.

After the Toon is sent outside, they must confront the Flunky in a battle. Because this specific battle involves a level one Flunky where there is no visible timer or any possible way to pass, it can never be lost through regular gameplay. After the Flunky is defeated, Tutorial Tom will teleport to the Toon and congratulate them on finishing their first ToonTask. He will then instruct the Toon to visit a nearby Toon Headquarters.

The Toon will be able to enter the Toon HQ where they will receive the reward for completing the ToonTask from HQ Harry: a Shticker Book. HQ Harry then gives the Toon a lecture on the Shticker Book's various pages.

After obtaining the Shticker Book, HQ Harry sends the Toon off to visit Flippy who stands near a tunnel that leads to Toontown Central. Flippy will then teach the Toon how to use SpeedChat and SpeedChat+. After this is done, he will say goodbye to the Toon and run straight through the tunnel. The Toon can then enter the tunnel to leave Tutorial Terrace and instantly teleport to Toontown Central.

After speaking to Tutorial Tom, the Toon obtains their first ToonTask.

After completing the first ToonTask shown above and speaking to Flippy, the Toon obtains their second ToonTask that involves riding the Trolley in Toontown Central.

After completing the second ToonTask shown above, the Toon obtains their third ToonTask that involves defeating Cogs to recover a "Blackboard Eraser".

After completing the third ToonTask shown above, the Toon obtains their fourth ToonTask that involves adding another Toon as a friend.

After completing the fourth ToonTask shown above, the Toon obtains their fifth ToonTask that involves calling Clarabelle on the telephone at their estate. The Toon is awarded one laff boost for completing all five ToonTasks.