Toons are the main protagonists of Toontown Rewritten and the inhabitants of Toontown. They come in 9 different species of animals, those being bears, dogs, ducks, cats, horses, monkeys, mice, pigs, and rabbits. They take the form of cartoon animals and each have their own unique design.

There is a selection of 9 toon species that players are able to create. They include bears, dogs, ducks, cats, horses, monkeys, mice, pigs, and rabbits. In Toontown Online, the bear, horse, and monkey could only be created by subscribed players, however this limitation does not apply to Toontown Rewritten.

NPC Toons have different occupations, which vary from fishermen, shopkeepers, Toon Council members, Professors, Doctors, HQ Officers, Clerks, and more. Each NPC has a location they may be found at. The Toons which the players control mainly focus on battling Cogs, doing activities such as racing or golfing, and completing ToonTasks.

Toons may participate in certain activites to gain jellybeans. Different activities (however not all of them produce jellybeans) include fishing, racing, golfing, Trolley, gardening and Cog fighting. At the moment, golfing is not in Toontown Rewritten.

Toons can group up in all activities. When fishing, Toons can play the fish bingo together, which gifts them jellybeans when finished before time runs out. Another example is the Trolley. Up to four toons at a time can sit on the trolley to participate in multiplayer minigames.

At Chip 'n Dale's Acorn Acres, Toons can jump on the geyser to fly for a few seconds, enjoy food on the picnic tables, or play games on the empty ones. The games were also included at ToonFest, where Toons were also able to throw pies at Cog dummies and ride the merry-go-round under the tower, which may be reversed, sped up or slowed down if a Toon hits a Cog dummy.

Non-playable characters are notable residents of Toontown who are characters run by a computer script rather than an actual person playing the game. There are various functions that NPC Toons carry out in the game, which include giving ToonTasks to player-controlled Toons, owning shops and being positioned in the playgrounds for promotional events.

A Jellybean Fest, shortened to Beanfests by the community, is when a group of toons stand close together, commonly in Toontown Central, and either one or multiple toons throw out Bean Unites (rewards from the CFO so the crowd gains Jellybeans.

Vibrant Valley (Toon Valley on Toontown Online) is a district popular for toons hanging around Toontown Central's plaza. Here, many toons do different non-official activities, such as "fashion shows", "game shows", and Beanfests (read above). 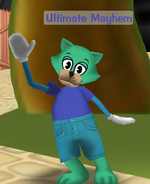 Many Toons in one area
Add a photo to this gallery
Retrieved from "https://toontownrewritten.fandom.com/wiki/Toons?oldid=48453"
Community content is available under CC-BY-SA unless otherwise noted.