"Create your own Toon and join the never-ending battle against the "Cogs", who want to turn Toontown into their latest business venture."
―Toontown Rewritten

Toons are the main protagonists of Toontown Rewritten. They are depicted as colorful, joke-loving, and carefree characters, that keep the Cogs from turning Toontown into a dark and depressing business dystopia. When a Toon is created, the player is able to choose the Toon's gender, color, and basic clothing. Once the player creates their Toon, the Toon is sent to Tutorial Terrace.

There is a selection of 11 total species that players may create. They include: dogs, cats, rabbits, ducks, horses, mice, monkeys, bears, pigs, crocodiles, and deer. Crocodiles and deer are Toontown's newest species since 2007 when pigs first arrived in Toontown Online.

Unlike the Cogs, Toons can take a joke. Toons use all sorts of hilarious gags to battle against the Cogs and make them laugh. As Toons progress by completing missions called ToonTasks, they can train up to six gag tracks. Every beginner Toon starts off with a level 1 gag from the Throw and Squirt tracks. Should a Toon run out of gags, they can visit Goofy's Gag Shop in any playground to purchase more. They, however, cannot purchase level 7 gags.

Invented by Doctor Surlee of Loony Labs, laff is the Toons' health. Toons can complete ToonTasks, max their Cog Disguises, and gain all trophies from certain activities to increase their laff limit. Every beginner Toon starts off with 15 laff points and can reach the maximum limit of 139 laff points. As said by Tutorial Tom, a happy Toon is a healthy Toon.

Outside of constant Cog battles, Toons may participate in certain activities to gain jellybeans or to have plenty of fun. Different activities include the Trolley, fishing, racing, golfing, gardening, and parties.

Toons can group up in some activities. For instance, Toons can play Fish Bingo with others to earn extra jellybeans. Another example is the Trolley where up to four Toons at a time can band together to participate in multiplayer minigames.

In Chip 'n Dale's Acorn Acres, Toons can sit at certain picnic tables to play picnic games. Such games are also available during Cartoonival, an annual event where Toons can participate in several activities and earn limited-time prizes.

NPCs (non-player characters) are notable residents of Toontown who are characters run by a computer script rather than an actual person playing the game. There are various functions that NPCs carry out in Toontown; the most notable of all NPCs are those who offer ToonTasks.

An illustration of a confused bear.

An illustration of a mouse running.

An illustration of a rabbit on a kart. 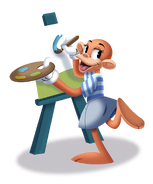 An illustration of a monkey using a canvas to paint with her brush.

An illustration of a crocodile catching the Clown Fish. 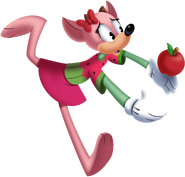 An illustration of a deer with an apple. 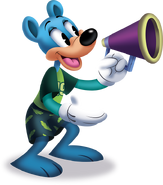 An illustration of Kong with a Megaphone.

An illustration of Lucie using Fire Hose on a Cashbot.
Community content is available under CC-BY-SA unless otherwise noted.
Advertisement