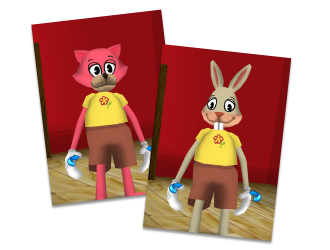 Toon colors are a customization feature where a player can pick a variety of colors for their Toon through the Create-a-Toon process. A Toon can be entirely one color, or have a different color for specific body parts. Colors are semi-permanent, meaning they cannot be changed unless the Toon Rewrite item is purchased from Clarabelle's Cattlelog for 10,000 jellybeans. Toon Rewrite allows the Toon to change the color of themselves from what they initially chose, and can only be purchased once every six months.