Toon Tag is a Trolley game that can be played by two to four Toons.

The objective is similar to a traditional game of real life tag. Toons must avoid being "IT" while ice cream cones, scattered around the course. All treasures gathered will yield points. The Toon who is "IT" cannot collect treasures and must tag other Toons in order to collect treasures themselves. The Toon who is "IT" can be identified by the large arrow pointing "IT" down at them, their large head, and faster speed. 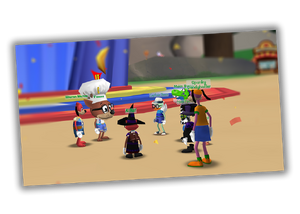 In an update released on September 22, 2018, "Cast Member Tag" was implemented to Toontown Rewritten where Cast Members can play Toon Tag with other Toons without having to visit the Trolley. The objective of this Cast Member minigame is very much similar to the original Toon Tag. Only a Cast Member can activate the minigame for Toons to start playing.

Retrieved from "https://toontownrewritten.fandom.com/wiki/Toon_Tag?oldid=93705"
Community content is available under CC-BY-SA unless otherwise noted.