The Toon Resistance is a group of Toons under the leadership of Lord Lowden Clear that pursue a goal to fight back against the Cogs. Several Resistance Rangers can be found as NPCs in certain boss battles and reside in Toon Buildings, while the majority appear as real players acting as anonymous staff members during special events. 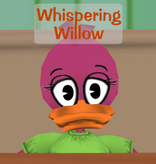 Supplier Stella
Add a photo to this gallery

The Resistance Salute is a special animation used to signify the membership or affiliation of the Toon Resistance. When using the animation, the Toon will jump up and say "Toons of the world unite!". It can be earned by visiting Whispering Willow in Pajama Place at Donald's Dreamland in her shop called Talking in Your Sleep Voice Training by saying the SpeedChat phrase, "Would you like some help?".

The Toon Resistance collected information during several weeks of July 2015 to prepare for their biggest move against the Cogs that would take place the following August: Operation: Storm Sellbot Headquarters. The Resistance Rangers managed to slow down production of the Sellbot Factory, which made the Vice President become weaker. Toons who did not have their own Sellbot Cog Disguise received Rental Suits to assist in fighting the Vice President. The Resistance Rangers secured an outpost where they offered Toon Resistance ToonTasks for unique rewards such as double gag experience, Cog Disguise parts, merits, special SOS cards, gag throws, and fabulous clothing and accessories.

During May 2019, the Toon Resistance initiated their next move against the Cogs: Operation: Crash Cashbot Headquarters. After coming across a highly classified Cog memo, the Resistance Rangers sabotaged Cashbot Headquarters, destroying the freight trains and covering the walls with graffiti. By doing this, they were able to weaken the Chief Financial Officer. Toons who did not have their own Cashbot Cog Disguise received Rental Suits to assist in fighting the Chief Financial Officer. The Resistance Rangers once again secured an outpost where they offered Toon Resistance ToonTasks for unique rewards such as double gag experience, Cogbucks, brand new unites, special SOS cards, and fabulous clothing and accessories.

Lord Lowden Clear and the Resistance Rangers at Sellbot Headquarters.

Resistance Rangers battle against the Number Crunchers during Tax Day.

A Resistance Ranger near some Cold Callers during December's annual Cold Caller Mega-Invasion.

A Resistance Ranger using a feather to Toon-up during a battle. 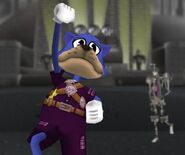 Resistance Ranger Rocky performs the Resistance Salute during a Skelecog Mega-Invasion.
Add a photo to this gallery
Retrieved from "https://toontownrewritten.fandom.com/wiki/Toon_Resistance?oldid=102036"
Community content is available under CC-BY-SA unless otherwise noted.