Start a Wiki
The Toon Hall is a Toon building located at Toontown Central. It is the town hall of Toontown. This is where Flippy resides in his own office, and Scientoons from Loony Labs are constantly inspecting the Silly Meter. 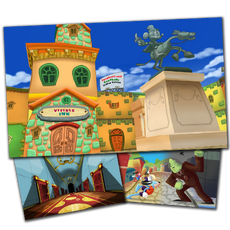 A temporary version of the Toon Hall where it is nothing more than Flippy's office.

Another temporary version of the Toon Hall for Toons who completed Professor Prepostera's ToonTask.
Add a photo to this gallery
Retrieved from "https://toontownrewritten.fandom.com/wiki/Toon_Hall?oldid=98934"
Community content is available under CC-BY-SA unless otherwise noted.