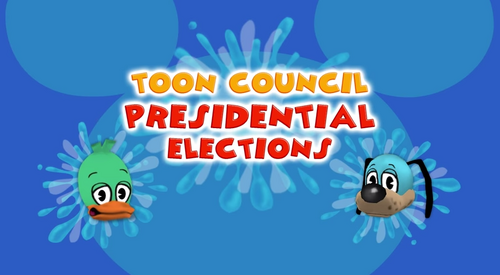 The Toon Council Presidential Elections was a major event where Flippy and Slappy were competing against each other to become the official president of the Toon Council. An announcement was made on February 17, 2014 by Alec Tinn, and election day occurred on April 19, 2014. Although the winner had been successfully elected, trouble brewed in Toontown for the very first time, as the Cogs unleashed an ambush marketing invasion known as Doomsday.

Both candidates, Flippy and Slappy, conducted a series of campaigns to whew the citizens of Toontown in order to win their votes. 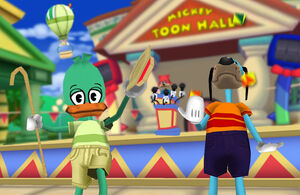 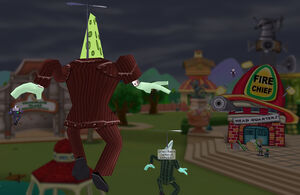 Before the election, Doctor Surlee stood outside to welcome Toons far and wide. Once the election began, Alec Tinn, Flippy, and Slappy exited out of the Toon Hall and approached to the stage. Flippy and Slappy then began their welcoming speeches. After that, Alec Tinn started the Grand Electoral Counters, revealing Slappy as the winner. Just as the celebration began, a Yesman came down from the sky. All Toons were surprised and somewhat frightened to encounter some strange robot, but Slappy's wacky personality led him to his downfall. The Yesman used "Positive Reinforcement" to drain all of Slappy's laff and cause him to go sad. Flippy defeated the Yesman with one of his pies after demanding where Slappy was transported to, thus the Cogs had arrived to initiate Doomsday.

The original event was livestreamed by Toontown Rewritten on April 19, 2014 from their official YouTube channel, as well as many other streamers of the Toontown community.

In celebration of Toontown Rewritten's fifth anniversary, an updated and remastered version of the Toon Council Presidential Elections was livestreamed on September 29, 2018 through Twitch and YouTube, with commentary from the Toontown Rewritten Team.

After the election ended, the camera zoomed into a portal and showed a credits scene that introduced Toontown Rewritten staff members. When the credits finished, a message would come up on the screen revealing that the game had closed until Beta. Several of the staff members had silly captions mostly related to blog posts published by them. (For example, Hawkheart was listed as the Fish Bingo Controller. This is a direct reference to the blog post, "Daily Alpha Update: The Tale of the Fish Bingo Controller").

All the credits can be seen at the end of the election livestream around 3:04:09.

Slappy's jellybean stand in a fainted state during Doomsday.

The election stage before podium recolor.

The elction stage after podium recolor.

Alec Tinn, hiding behind the Toontown Bank during the election.

The Toontown Rewritten logo at the end of the election.
Add a photo to this gallery

Reliving DOOMSDAY! LIVE with the Toontown Team
Add a photo to this gallery
Retrieved from "https://toontownrewritten.fandom.com/wiki/Toon_Council_Presidential_Elections?oldid=89645"
Community content is available under CC-BY-SA unless otherwise noted.