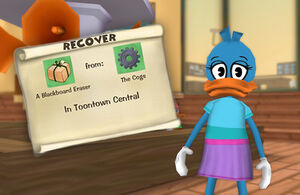 A ToonTask is a task in which a Toon can complete to progress through the game. A ToonTask can be offered by visiting any shopkeeper or HQ Officer and selecting a ToonTask. Once a Toon has selected a ToonTask, they must complete it before selecting another ToonTask, with the exception of "Just for Fun!" ToonTasks. ToonTasks may involve defeating Cogs, delivering items or gags to shopkeepers, fishing, riding the Trolley, calling Clarabelle's Cattlelog, or making new friends. Once a Toon completes a ToonTask, they must visit the specified NPC shown on the ToonTask.

If a Toon does not like the ToonTask the HQ Officer gives to them, Toons can try talking to other HQ Officers, since each HQ Officer has different sets of ToonTasks.

If a Toon knows which NPC will be giving them their next task, they may walk right to that NPC and speak to them for the task. This is a method for Toons that know where they need to go next, which will help them avoid visiting the Toon Headquarters repetitively after every task they complete. For example, if a Toon knows that the next NPC they must speak to is Lil Oldman, they can simply visit him instead of visiting an HQ Officer first.

Toons can view their ToonTasks by holding down the "End" key on Windows or by pressing fn+right on Mac. Toons can also view them through their Shticker Book.

In some cases, the tasks may require to recover a specific item by either defeating Cogs or going fishing. The table below shows the terms and percentages.

As the name implies, these tasks are just for fun and are not required for completion to progress through the game, but can beneficial in some cases. The rewards for the tasks may include jellybeans, clothing tickets, or cheesy effects. The rewards improve as the Toon progresses through the game, but the task required to earn the reward usually becomes much harder depending on the playground the Toon is working at. These tasks can also be deleted through the Shticker Book, but once deleted, the progress made for the respective task will be gone forever.

A Toon completing a ToonTask for teleport access to Toontown Central.

A ToonTask that rewards a beta key. 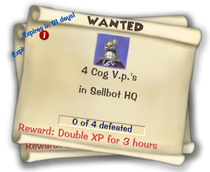 A set of Toon Resistance ToonTasks.

Professor Prepostera offering a Loony Labs ToonTask to a Toon.
Add a photo to this gallery
Retrieved from "https://toontownrewritten.fandom.com/wiki/ToonTask?oldid=95372"
Community content is available under CC-BY-SA unless otherwise noted.