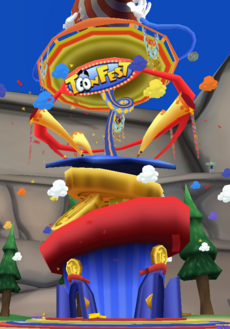 The ToonFest Tower is a large tower of silliness centered around the ToonFest grounds. By throwing pies at a Cog dummy, Toons can speed up, slow down, and reverse the direction of the platforms around the tower.

The tower returned for ToonFest 2015 with a different design of a larger blue and red cupcake consisting of four locked doors, and giant ToonFest tokens placed on top replacing the pillow. Starting with the 2015 event onwards, Toons can visit the Token Takers from within the tower to purchase all sorts of special limited-time clothing and accessories by using tokens.

Retrieved from "https://toontownrewritten.fandom.com/wiki/ToonFest_Tower?oldid=82807"
Community content is available under CC-BY-SA unless otherwise noted.