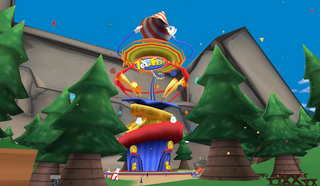 ToonFest 2015 was an event that marked the second anniversary of Toontown Rewritten. The event was held in a temporary newly constructed area located in Chip 'n Dale's Acorn Acres called the Event Grounds.

Unlike ToonFest 2014, the event began on September 19, 2015 and lasted for a whole month up until October 19, 2015, along with the formal introduction of Riggy Marole. The day this celebration began was also the second year anniversary of the closure of Toontown Online.

On July 9, 2015, a "Prep for ToonFest" contest was hosted to help prepare for the event. The winner's idea will be created by the Toontown Rewritten Team and put into the game itself as part of ToonFest, along with receiving a real life Toontown Prize Pack.

It is a large, grassy, hilly area dotted with several pine trees, tons of confetti, cannons, trampolines, and picnic tables, some of which Toons can play picnic games on. While remaining at the area, the sky would go through a process of the day and night cycle. A dirt road leads from the ToonFest entrance, all the way to the ToonFest Tower. Close by is a large mountain with a mysterious mine shaft coming out of it. The mineshaft is inaccessible, but can clearly be seen if you managed to get on top of the ToonFest Tower.

Unlike ToonFest 2014, new features were added to the area, such as cannons, trampolines, and ToonFest Tokens. The ToonFest Tokens were used to purchase many new prizes upon visiting the Token Takers when the doors of the ToonFest Tower opened from October 11, 2015 to October 19, 2015. The first update occurred on September 21, 2015 with the introduction of bean bags. Scattered across the ToonFest area are bags that give jellybeans as well as tokens in various amounts depending on the color depicted on the bag.

ToonFest had many activities, some of which already existed before the opening. Toons were able to play Find Four, Chinese Checkers, and Checkers on the empty tables. There were normal picnic tables, which would spawn food when a Toon sits somewhere on the benches. Cannons and trampolines also made their debut at the event, giving ToonFest Tokens at the end of the activity.

Flippy was also at the celebration with his pie stand and his new pet doodle, Fluffy. Toons could take pies from Flippy's pie stand to throw at Cog dummies. Melville was standing near a fishing pond, allowing Toons to fish and sell them to Melville for ToonFest Tokens.

See ToonFest 2015 Prize Booth for all of the prizes.

Within the ToonFest Tower, Token Takers managed a prize booth where Toons could purchase all sorts of brand new clothing and accessories.

Add a photo to this gallery
Retrieved from "https://toontownrewritten.fandom.com/wiki/ToonFest_2015?oldid=82362"
Community content is available under CC-BY-SA unless otherwise noted.