During ToonFest 2014 you can get a free shirt and pants. To get the outfit, type in toonfest2014 in your shticker book in the code section. Once you type it in, you will get it after a couple of minutes! (Full outfit can be seen in the gallery.)

The tunnel which leads to ToonFest

The End of Beta notice 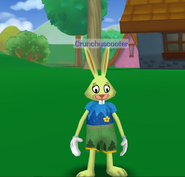 A toon with the full toonfest outfit.
Add a photo to this gallery
Retrieved from "https://toontownrewritten.fandom.com/wiki/ToonFest_2014?oldid=24209"
Community content is available under CC-BY-SA unless otherwise noted.