Token Takers are NPC clerks working at the ToonFest Tower of the event grounds since their first appearance during ToonFest 2015. The Token Taker's job is to offer prizes to Toons, which can be bought in exchange for ToonFest Tokens.

The Token Takers are all bears with the same legs and body size, but they have a different head and muzzle shape, including different colors. They all wear a red striped suit, with a red bowtie and a bamboo hat. The male Token Takers also have mustaches.

The Pie Purchase stand offered throwable items (like snowballs during Christmas). Once bought a pie of any kind, the Toon may not buy a different kind of pie until they have consumed all their pies. Toons may still, however, buy more pies of the same type. 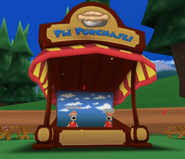 The Pie Purchases stand from ToonFest 2016

The Merry Multipliers stand at ToonFest 2016

Retrieved from "https://toontownrewritten.fandom.com/wiki/Token_Takers?oldid=96189"
Community content is available under CC-BY-SA unless otherwise noted.