The Rewritten Device is a device that allows a Toon to rewrite themselves entirely by gender, shape, color, and even species. As documented in the blueprint on the right, the Toon is simply pressed onto a canvas in neutral form for editing and inflates from the canvas once editing is complete, resulting in being rewritten. Gyro Gearloose invented the device to rewrite himself into becoming Doctor Surlee to begin his rewritten story and conduct an experiment to rewrite Toontown.

YOU KNOW WHAT THEY SAY: THREE ARMS ARE BETTER THAN ONE

TOON IS PRESSED ONTO CANVAS IN NEUTRAL FORM FOR EDITING

ONCE DONE, TOON IS INFLATED FROM THE CANVAS, ENTIRELY REWRITTEN

COLOR, SHAPE, GENDER, AND EVEN SPECIES CHANGES ARE POSSIBLE

DANGEROUS - IF ONE CAN REWRITE THEMSELVES, WHO CAN BE TRUSTED?[1]

On November 26, 2014 in regards to an ARG, players that created a Toon with the resemblance of Doctor Surlee including his correct species, color, and size would trigger "Toon-Rewritinfo" notifications when speaking to some NPCs, especially the HQ Officers who give ToonTasks. This feature had since been removed. 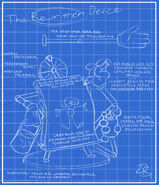 The Rewritten Device blueprint by itself; "Understanding". 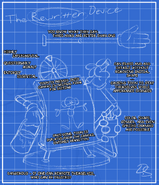 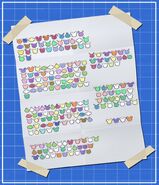 The backside of The Rewritten Device blueprint; "Toons are full of information".

A list of Doctor Surlee's "Toon-Rewritinfo" debug responses.
Add a photo to this gallery

Retrieved from "https://toontownrewritten.fandom.com/wiki/The_Rewritten_Device?oldid=103212"
Community content is available under CC-BY-SA unless otherwise noted.