"Enough with the chit chat, let's mingle."
―The Mingler

The Mingler is the seventh Cog on the corporate ladder of the Sellbots. They normally range from level 7 to level 11; however, they can exceed level 11 in Sellbot Field Offices. They are among one of the building-only Cogs that appear in Cog Buildings, and can be found extensively in the facilities of Sellbot Headquarters.

Below are Merits required to obtain every promotion for each Mingler level of the Sellbot Cog Disguise.

The term "mingler" describes someone who attempts to socialize with several groups of people, usually in order to gain a higher status. It may also describe someone who engages with others at social functions. 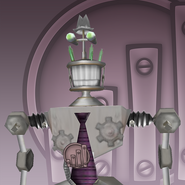 A Mingler saying "Enough with the games, let's mingle."

The Mingler was the top-dog Sellbot of the final four in the top-dog Cog race.
Community content is available under CC-BY-SA unless otherwise noted.
Advertisement