The Chairman is rumored to be the boss and leader of all Cogs, who was first mentioned by the Director of Ambush Marketing during Doomsday. In a document issued to "Sellbot Department 18-A", the Chairman stated that he plans to offer Mover & Shakers "quality offices" for their exceptional work provided towards Doomsday. Although it has been confirmed that the Chairman exists in Toontown Rewritten's storyline, it is unknown when the Chairman will actually make an appearance within the game.

A Chairman is the presiding officer of a meeting, committee, board, etc.. 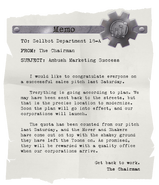 A memo issued to "Sellbot Department 18-A" by the Chairman.

Old ToonTown Download Video
The video itself
Chairman fanaticdeptionsdz.png
A fan-depiction version of the Chairman, having the same head as the head above the entrance to the Sellbot Factory entrance.

The Director of Ambush Marketing seen mentioning the Chairman during Doomsday.

A memo sent to The Big Cheese from the Chairman speaking for an executive meeting at the Executive Office Tower.
Chairman3D.PNG
A possible 3-D fanmade render of the Chariman (Made by Swag Foreman)
Add a photo to this gallery
Retrieved from "https://toontownrewritten.fandom.com/wiki/The_Chairman?oldid=96590"
Community content is available under CC-BY-SA unless otherwise noted.