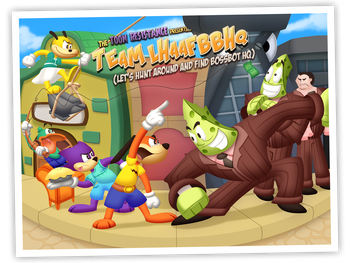 This mini-comic, titled "The Adventures of Team LHAAFBBHQ", tells the story of how four Toons were selected for the most dangerous mission of their lives.

Suddenly, four Toons crash into the Acorn Acres geyser in their golf kart, causing the kart to break apart. Lowden reveals to Gil that he wants the four Toons to formulate a team and search for Bossbot Headquarters. Gil worries that they are not prepared for such a mission, but Lowden begs to differ.

Add a photo to this gallery
Retrieved from "https://toontownrewritten.fandom.com/wiki/Team_LHAAFBBHQ/Comic?oldid=100808"
Community content is available under CC-BY-SA unless otherwise noted.