Outdated content
This page contains information about content that once existed but had been removed from Toontown Rewritten, or was likely scrapped at some point in development due to being deemed unfit for the game.

This hot air balloon belonged to Slappy, which was created for one of his campaigns while running as a candidate in the Toon Council Presidential Elections. It was a small balloon that represented Slappy's color and his signature clothes. At one point, Flippy's toy airplane had an accident and sat on top of the balloon. Toons could ride the balloon to circle around Toontown Central.

Below are various dialogues from Slappy when he communicated with a Toon riding his balloon. 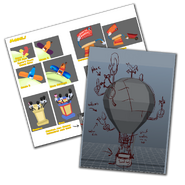 Slappy on the balloon.

The "Unbirthday Cake" from the balloon.

Slappy's balloon during the election.