"As most of you know: I'm Slappy! Not Slap-happy, Sloppy, or Slappie -- but Slappy."
―Slappy[src]

Slappy is an NPC duck Toon who is commonly known for introducing traditional events involving Polar Bears and The Great Snowball Fight, and being a candidate in the Toon Council Presidential Elections. He first appeared during Christmas in 2013 from December 24th to December 27th, followed by his second and third appearance in 2014 to give Toons a ride on his hot air balloon and during election day (April 19th), in which he was elected as president of the Toon Council, respectively.

"It would be nice for me to introduce myself for you to know me, so here is an introduction: I'm Slappy! I've lived in Toontown for a few years now, living in the Colorful Canvas district just past the outskirts of Donald's Dreamland."
―Slappy[src]

Slappy originally lived in Duckburg before he moved to Toontown. Although Slappy lived in Toontown for many years, Toons had never really heard of him until he made his debut via the Toontown blog on December 24, 2013 for Christmas where he announced that he was running in the Toon Council Presidential Elections with his rival candidate, Flippy. On that day, Slappy offered a special opportunity for bears to become Polar Bears, and even started an annual tradition of The Great Snowball Fight fee days later.

"I'll tell you why I'm here: Publicity! Lots and lots of publicity. Why do I need this publicity? Aside from fame, fortune and glory- I'm needing some publicity for the Election."
―Slappy[src] 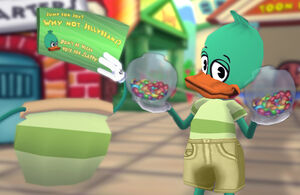 A few months after the Polar Bears and the snowball fight, Slappy offered several unites for jellybeans and gags, a ride on his very own hot air balloon, and allowed Toons to obtain a "Green Toon" cheesy effect for the first time on St. Patrick's Day, thanks to the mysterious green goo that ended up on his jellybean stand.

As the campaigns from both candidates went underway, Flippy grew a sense of jealously when he learned that Slappy's wacky personality caused his sudden boost in laff points. Slappy was fully unaware of Flippy's complaints about his campaigns being "hurtful" and the 42 total laff he had, which was the highest laff that a Toon could ever have at the time.

Because Slappy had more campaigns than Flippy, he ultimately won the election against Flippy by many votes, and was elected as president of the Toon Council. However, an unexpected interruption from the Cogs occurred.

"Slappy won the vote by just a few hundred more than Flippy, but just as the celebration begun, something unexpected happened. A robot flew down from the sky, dressed in a fancy suit with a big smile. A Yesman. Slappy didn't know what was happening -- no one did -- and he went sad in Toontown Central. We haven't seen him since."
―Sir Max[src] 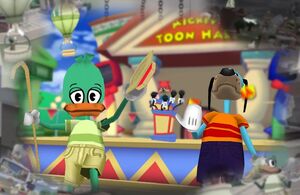 Slappy's fate at the Toon Council Presidential Elections left many Toons speechless and questioning where the Cogs took him. Discussions regarding the possibility of finding Slappy began since the Toon Council's very first meeting after the fact. While Lord Lowden Clear stated he had no idea where to begin looking, Doctor Surlee on the other hand had a few ideas. Although the Cogs captured the rightful ruler of Toontown, it is known that Flippy resumes an ongoing effort to search for Slappy.

Slappy introduced Polar Bears and The Great Snowball Fight for Christmas in 2013, both of which became annual traditions. Due to his absence, Slappy was unable to return and continue the traditions for years to come. However, Doctor Surlee (eventually replaced by Paula Behr) and Flippy later took over the responsibility of continuing the traditions in Slappy's honor.

Slappy takes a ride on his hot air balloon.

Slappy transforming a bear into a Polar Bear.

Slappy on stage during the Toon Council Presidential Elections.