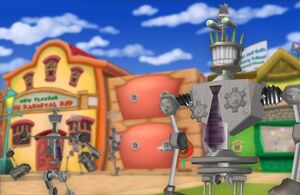 The Skelecog Mega-Invasion takes place annually during the month of November (November 21st - November 23rd) and June (June 12th - June 14th) where Skelecogs invade Toontown with a Mega-Invasion in all districts except ones that are identified as "safe zones".

Retrieved from "https://toontownrewritten.fandom.com/wiki/Skelecog_Mega-Invasion?oldid=85421"
Community content is available under CC-BY-SA unless otherwise noted.