"I have a short temper for Toons."
―Short Change

A Short Change is the first and lowest Cog on the corporate ladder of the Cashbots. Their levels range from one to five.

A short change is someone who steals small amounts of currency during monetary transactions. This is achieved by giving less change to a customer than what they are owed.

A Short Change about to explode.

A gag used on Short Changes that misses. 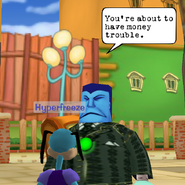 A Toon confronting a Short Change. 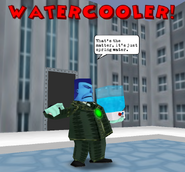 Short Change using Clip on Tie attack.
Add a photo to this gallery
Retrieved from "https://toontownrewritten.fandom.com/wiki/Short_Change?oldid=102948"
Community content is available under CC-BY-SA unless otherwise noted.