The Presentation is the level seven Lure gag. Like all level seven gags, after Toons obtain 10,000 skill points in Lure, the skill points meter converts to "500 to Go!" It can't be obtained at Goofy's Gag Shop, and the Toon can only use it once before having to earn another 500 points or collecting the gag in their garden to obtain it again. It is preceded by the Hypno Goggles.

A Dog earning the Presentation Gag. 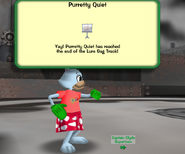 A Cat earning the presentation gag.
Add a photo to this gallery
Retrieved from "https://toontownrewritten.fandom.com/wiki/Presentation?oldid=99656"
Community content is available under CC-BY-SA unless otherwise noted.