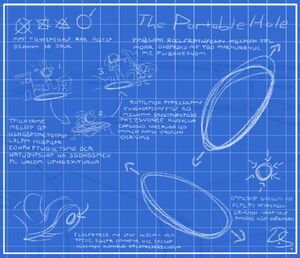 The portable hole is an invention by Gyro Gearloose/Doctor Surlee that allows Toons to teleport to playgrounds and Cog headquarters under certain circumstances. According to the blueprint on the right, the way the portable holes work is a Toon jumps into a hole, springs onto a trampoline, and comes out flying out of the other hole.

"Once again, I had to put my own bypasses in. Against the rules? A little bit. It is my invention, however. The mumpkatron can handle it. Probably."
―Doctor Surlee[src]

The bypasses were invented by Doctor Surlee to teleport to certain areas of the playgrounds and Cog headquarters by saying certain SpeedChat phrases. This was a secret route that led to Lawbot Headquarters before the entrance in The Brrrgh at Polar Place opened. Doctor Surlee was placed on trial by the Chief Justice for creating these bypasses against the wishes of the Toon Council. After the opening of the entrance from Polar Place, the bypasses stopped working.

Tip: You can check your Toon's coordinates by hitting shift+F1 on Windows, or fn+shift+F1 on macOS And Some Keyboards

Retrieved from "https://toontownrewritten.fandom.com/wiki/Portable_hole?oldid=93955"
Community content is available under CC-BY-SA unless otherwise noted.