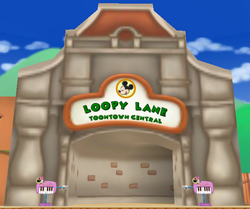 Playgrounds are the safe central area of the neighborhoods (excluding Cog HQs). Playgrounds have tunnels in them that lead to the streets, which lead to different neighborhoods.

The neighborhoods are named by the order of where the Toons go for progression: Toontown Central, Donald's Dock, Daisy Gardens, Minnie's Melodyland, The Brrrgh, and Donald's Dreamland

A Toon HQ is the main toon builidng located in every playground and streets. In Toontown Rewritten Alpha, Toon HQs were essentially just there for decoration; though it can be entered, there's nothing to do while inside. This changed during Beta, where Toons could receive ToonTasks from the four HQ Officers inside.

The fishing pond is a small body of water in every playground. By standing on one of the docks, a Toon may fish to earn Jellybeans and Laff Points. The small black shadows in the ponds represent fish, old boots, or Jellybean Jars. Toons may also fish here to complete ToonTasks.

The Trolley is a locomotive that Toons can ride to play mini-games called Trolley Games to earn more Jellybeans. Up to four Toons can play, and there are some Trolley Games that can only be played with multiple Toons. Once a Trolley Game is finished, the Toon(s) have(/has) the choice to play another game or return to the playground.

Retrieved from "https://toontownrewritten.fandom.com/wiki/Playground?oldid=42257"
Community content is available under CC-BY-SA unless otherwise noted.