Photo Fun is a Trolley minigame. It can be played by any number of Toons.

The objective of the minigame is to take the best photo of the depicted Toon. A panel at the bottom shows the desired Toon doing the motion required for the photo. This includes the desired Toon walking, jumping, or performing animations. Other Toons playing the game compete with each other to take the best photos, varying from one star images to five star images. The best photo taken is then is displayed at the bottom of the screen. A camera in the bottom right hand corner shows the best taken image, current score, and best score.

The following controls are default but can be altered from the Options menu based on the player's personal preferences. 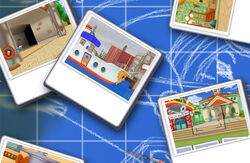 Retrieved from "https://toontownrewritten.fandom.com/wiki/Photo_Fun?oldid=115236"
Community content is available under CC-BY-SA unless otherwise noted.