"A penny saved is a penny earned."
―Penny Pincher

Penny Pincher is the second Cog on the corporate ladder of the Cashbots. They range from level 2 to level 6.

Below are Cogbucks required to obtain every promotion for each Penny Pincher level of the Cashbot Cog Disguise.

A "penny pincher" is a nickname for someone who attempts to save every penny possible, typically synonymous or used with Tightwad, for example: "That penny-pinching tightwad only wanted to pay the tip for lunch. He stuck me with a 60 dollar bill!" 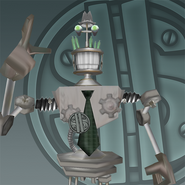