Operation: Storm Sellbot Headquarters was a major event that commenced on July 31, 2015, and ended on August 31, 2015. After the Toon Resistance managed to shut down the Sellbot Factory, they found the perfect opportunity to invade the local Sellbot Headquarters. The event underwent five phases from an unexpected Mover & Shaker Mega-Invasion to an extended Operation time.

At the heart of Sellbot Headquarters, the Toon Resistance managed to secure their own "Resistance Outpost" composed of crates and gag barrels. Near the Resistance Outpost, Toons could find Lord Lowden Clear and several Resistance Rangers such as Rocky, Loopy Loopenloop, and Goofenshmirtz across the headquarters. 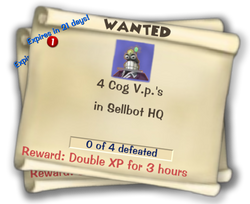 Toon Resistance ToonTasks arrived to offer exclusive rewards that Toons could not receive at any other time. Toons could complete these limited-time ToonTasks to earn all sorts of rewards including double gag experience, Cog Disguise parts, merits, gag throws, special SOS cards, and fabulous clothing and accessories.

The Toon Resistance expected Toons to complete their ToonTasks in due time to ensure that the Operation was a success. Once their takeover of Sellbot Headquarters concluded on August 31, 2015, the ToonTasks expired and Toons were unable to claim their rewards.

Battle against the Vice President 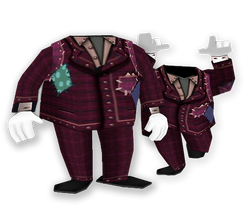 Toons of any laff without their own Sellbot Cog Disguise could pick up a Rental Suit to infiltrate the Sellbot Towers, battle against the Vice President, and take advantage of his weakened security. Some Toon Resistance ToonTasks also involved helping a certain number of Rental Toons defeat the Vice President.

Rocky introduces "Phase One" of the event to fend off against an unexpected Mover & Shaker Mega-Invasion.

Goofenshmirtz introduces "Phase Two" of the event to deploy supplies.

Flippy introduces "Phase Five" of the event with an extension.

A Vice President battle during Operation: Storm Sellbot Headquarters.
Add a photo to this gallery

Retrieved from "https://toontownrewritten.fandom.com/wiki/Operation:_Storm_Sellbot_Headquarters?oldid=95881"
Community content is available under CC-BY-SA unless otherwise noted.