Operation: Duck Hunt is an upcoming insinuated mission with the goal of saving Slappy after being captured by the Cogs when they invaded Toontown for the first time during the Toon Council Presidential Elections. Slappy is said to be located within the Executive Office Tower at Bossbot Headquarters, but Lord Lowden Clear warns that it is much too dangerous for Toons and the Toon Resistance to sneak in without getting caught by security goons.

"In the meantime, the concepting stages for our end of Beta event just started just last month, and we're hard at work on bringing it to life. I can't say too much yet, but I can tell you that it is going to be a heck of a lot more fun than Doomsday, but also a heck of a lot more work. You're going to want to train up your Toons when you get some time in-game, because you'll need a lots of Laff for this."
―Joey[src] 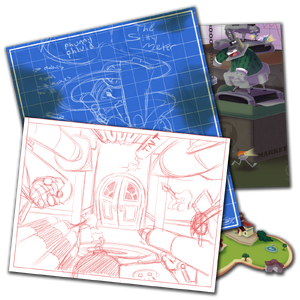 Development for an end of Beta event was first mentioned by Joey (Sir Max) in a blog post titled "Backstage: Designing Doomsday" discussing how Toontown Rewritten went into creating Doomsday and its behind-the-scenes work. According to Joey, the end of Beta event would be a lot more fun than Doomsday but also a lot of hard work to take part in, suggesting that players would want to progress their Toons in order to gain a lot of gags and laff.

A day later after Joey's blog post, Kati (Captain Sandy) revealed an image of upcoming new content that is named "Concept-duckhunt". Some of the concepts in the image itself reveals what looks to be the Chief Financial Officer fighting off against Doctor Surlee's camera bots, along with the Chief Executive Officer's podium from behind, and several goons walking by. This may be the concept for a major boss battle related to the event.

"Listen, I’ve done that to many before but this year it’s with good cause. Train your gags, buff your Laff, and fight as many Cogs as you can… All these years later, I’ll say it again. Slappy lives. …And we’re going to save him."
―Doctor Surlee speaking to the Toon.

During the Twelve Days of Winter, Doctor Surlee stops by Tutorial Terrace supposedly waiting to retrieve his mail from a mailbox near the street's Toon Headquarters. Unlike those who create a Toon of other species, players who create a bear are revealed extra dialogue from Surlee. Surlee at first refuses to allow the Toon to become a Polar Bear but offers the transformation regardless. Not only does Surlee transform the Toon into a Polar Bear, he warns about something big that will be happening, and that Toons will need to train their gags and buff their laff, confirming that Slappy is alive and will be saved.

"It's a troubling scenario. But who can we send? You can't go out on your own, and the rest of us need to stay behind and prepare for Operation: Duck Hunt. The Toons aren't ready yet."
―Lord Lowden Clear speaking to Good ol' Gil Giggles. 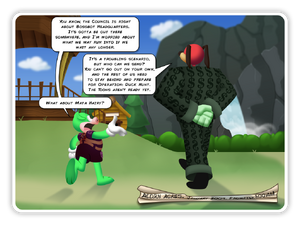 To debut the arrival of Team LHAAFBBHQ, Toontown Rewritten created a mini-comic, showcasing a conversation between Good ol' Gil Giggles and Lord Lowden Clear. Lowden states that the Toon Resistance needs to stay and prepare for Operation: Duck Hunt because the Toons are "not ready".

Shortly after Team LHAAFBBHQ's capture, Lowden eventually announced that Bossbot Headquarters had been uncovered and offers some insight about the Bossbot Clubhouse, the Cog Golf Courses, and the Executive Office Tower. The Toon Resistance was unable to infiltrate the tower due to the security goons blocking possible entrances. By peering through the windows, the only information that was gathered is that the large elevators seem to be capable of fitting a Cog boss inside.

"Yes, it's about this again. The duck continues to be uncooperative with us. He will not give any information on the Toons or their operations."
―The Chairman to The Big Cheese 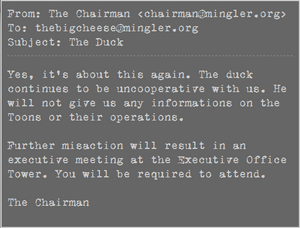 A website related to the Cogs known as mingler.org was created as an ARG puzzle to correspond with the release of Bossbot Headquarters. When the team was eventually captured by the Bossbots after finding pieces of a peculiar picture, memos were found on the website with the help of accessing accounts from each Bossbot. One of the memos revealed a message sent by the Chairman to The Big Cheese regarding "the duck" being uncooperative with the Cogs and refusing to lend them information about the Toons' operations. Another memo revealed a message sent by The Big Cheese to the Corporate Raider, questioning the presence of Team LHAAFBBHQ inside the Executive Office Tower instead of Cog Nation.

"...I can say that there is someone in there. Someone that you've all been waiting for. And it's not Team LHAAFBBHQ, they're somewhere else."
―Joey

At OMG!Con 2015, a lot of behind-the-scenes work was presented, including a look at how Bossbot Headquarters was completely redesigned. As Joey speaks to the audience about Bossbot Headquarters, he then reveals some new information about the Executive Office Tower. Although he was unable to reveal too much, he speaks of a certain Toon residing within the tower that a lot of the Toontown community have supposedly been waiting for, presumably being Slappy. The memos from mingler.org stated that Team LHAAFBBHQ was not meant to be transported to Cog Nation, but Joey's statements could possibly suggest that plans have been made to change up the game's lore.

In 2016, Toontown Rewritten hosted OMG!Con 2016, continuing the tradition of real life events as they hope to have at least one convention every year. After a presentation was shown, the staff answered several questions asked by the attendees. One of the attendees asked a question about the Executive Office Tower. To answer the question without revealing too much, Joey stated that the four main Cog bosses will reside there. This more than likely refers back to the "Concept-duckhunt" image where the Chief Financial Officer and Chief Executive Officer are shown, making the image actually relevant. When Bossbot Headquarters was uncovered, Lord Lowden Clear had also mentioned that the Executive Office Tower contained elevators large enough to fit a Cog boss.

Retrieved from "https://toontownrewritten.fandom.com/wiki/Operation:_Duck_Hunt?oldid=104480"
Community content is available under CC-BY-SA unless otherwise noted.