Operation: Crash Cashbot Headquarters was a major event that commenced on May 2, 2019, and ended on May 31, 2019. After uncovering a highly classified Cog memo with mentions of a "C.F.O. Project" to fight back against the Silly Meter, Lord Lowden Clear initiated an operation to put a stop to the Cogs' plan. 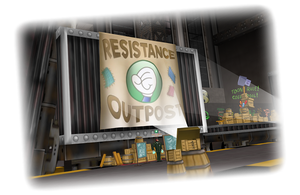 Near the Resistance Outpost, Toons could find Lord Lowden Clear and several Resistance Rangers such as Rocky, Loopy Loopenloop, Bulletin Belle, Cassie Peppercakes, and some new Goofy's Gag Shop suppliers across the headquarters. 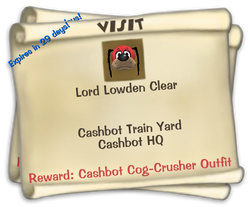 The Toon Resistance expected Toons to complete their ToonTasks in due time to ensure that the operation is a success. Once their takeover of Cashbot Headquarters concluded on May 31, 2019, the ToonTasks expired and Toons were unable to claim their rewards.

Battle against the Chief Financial Officer 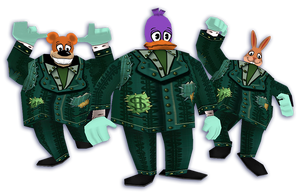 "Look what fun they're having."
"Too bad they have the wrong C.F.O.."
"You should go green."
"I can only stop red."
"Don't be so negative."
"Stop mocking me."
"Go trains, go trains! Woo!"
"There are no trains."
"Wanna play a game?"
"Don't say red light, green light."
"Hi over there!"
"My existence is meaningless."
―Green light and red light conversing.

The initial Cog memo with some other memos about the "C.F.O. Project".

Whispering Willow performs the Resistance Salute in Talking in Your Sleep Voice Training.

The Toon Resistance's most decorated and experienced Ranger as well as Lowden's personal right-hand Toon, Rocky.

Lord Lowden Clear and the Resistance Rangers in front of the Cashbot Vault's doors.

Lord Lowden Clear and the Resistance Rangers on the final day of the operation.

The Pick-a-Toon screen during Operation: Crash Cashbot Headquarters.
Add a photo to this gallery

Retrieved from "https://toontownrewritten.fandom.com/wiki/Operation:_Crash_Cashbot_Headquarters?oldid=101298"
Community content is available under CC-BY-SA unless otherwise noted.