This page lists all blog posts that were posted on the Toontown Rewritten website during the year of 2017. It will be updated as the year progresses.

Happy New Year from Toon HQ! Our HQ Officers have been monitoring the New Year's Top Toons Marathon closely, and after some anti-Cog analysis along with your standard run-of-the-mill review we've put together the list of winners who will receive a Blue Medallion for their effort! 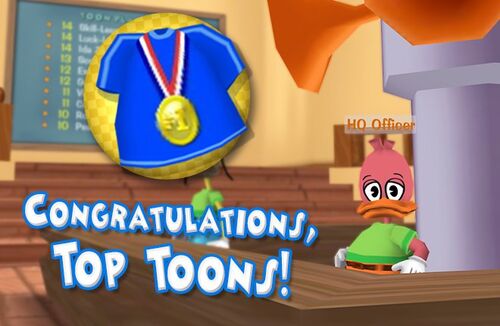 This is a real big list, so bear with us. We had so many awesome Toons this year! If you didn't make the cut, don't sweat it. There are new contests coming your way soon.

NOTE: Don't see your Toon up there?

If we made a mistake, then please email us and we will correct it. (Such as, if a friend or sibling played on a Toon in your household.)

• Toons found to be cheating during the event, or have received a recent serious infraction, have been disqualified. It's no fun for anyone!

• If you think that your Toon has not been listed by mistake, don't hesitate to contact us at support@toontownrewritten.com! We'll investigate and figure out what went wrong.

Thanks for kicking off the new year with us! We're incredibly proud of the massive amount of Cogs that was taken down by our Top Toons. Stay TOONed for brand new contests coming your way, along with new updates on the horizon.

Have fun in Toontown!

Hello, Toontown! Sorry to keep you starving for blog posts for a couple of days. The beginning of each year means big things for Toontown Rewritten as we prepare our first update of 2017, finalize planning for our ToonFest convention, and a few other little things that we'll talk about here.

Today we'll be telling you all about what's going on with Backstage Toontown this month!

Back in November, we told you all about a plan that we had to bring Toontown out of beta in 2017 with a full release. There are many parts to this, and we're happy to report that things are coming along nicely! 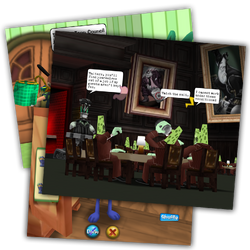 An upcoming update will contain plenty of widely requested bugfixes, and we greatly encourage you to keep reporting them to us -- even if you know they've been reported before by someone else. This helps us to identify which bugs are the biggest priority for fixing.

In addition to fixing up bugs - our system engineer, Sam ("Shockley") has been working to completely overhaul our update deployment system. This will allow us to not only get updates out faster, but improve the quality of our testing procedures!

New Toons for the Team

This is something we're very excited about - after a long period of trying to refine our application processes and the way we train new team members, new Toons have joined the Toontown Rewritten Team!

In the past month, we've interviewed and started training five new team members (That's a lot at once!) for various positions on the team. Undoubtedly, you'll start seeing a positive effect on the team very soon based off of the work that they're doing.

We'll have more information about how YOU may be able to help out with Toontown Rewritten very soon!

Waiting for some news on the Toon Species Election? We're sorry for keeping you in the dark! The next stage of the election is almost ready to start, and we've introduced a brand new role for our team to coincide with it: Contest Planner.

We really love hosting contests and events here in Toontown, but we've only managed to have a few per year. Starting with one that revolves around the Toon Species Election, you can expect many more contests and out-of-game events coming to keep you occupied. 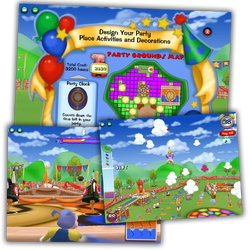 We told you a little while back about how Parties were coming along, but as the nature of development goes we ended up getting sidetracked with other important projects. We dusted off our party hats, though, and are excited to tell you that Toon Parties will be one of the upcoming features added to Toontown.

Coming to the Convention?

One of the most exciting things we've been doing in January is planning for our next convention. We're looking at locations, activities, and ideas from all angles to figure out how we can make it an extraordinarily fun event for ALL of Toontown - even if you can't make it in person.

This is where we want to hear from YOU -- post a comment, make a community post, or send us an email about any location, activity, or event suggestions for ToonFest 2017. We'll be making an announcement in the coming weeks with more information about the event. Don't buy any tickets yet!

That wraps up about all we can tell you for now. Keep your eyes peeled on the blog to see all of this content come to life. We hoped that you enjoyed this Backstage column, and we hope to make many more to keep you in the loop of all things Toontown!

Calling all Toons! It's the Toontown Team here, bringing you exciting news from the "Backstage" of the Tooniverse. We've been working hard behind the scenes, and to make this Toontown's biggest year ever we need YOU! 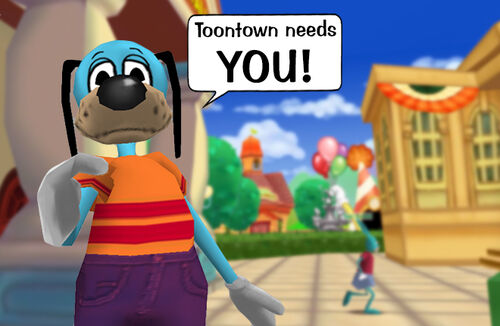 As you may know, we've been hard at work since November to restructure ourselves with the goal of bringing Toontown Rewritten out of beta this year. This is a task of Toontanic proportions, and if we asked you to join us back in October -- we wouldn't have been able to achieve it.

After many months of organization, reprogramming our tools, and working hard on all of the internal sides of our game (We're not Cogs, are we?), we're on track to make this accomplishment count. We've always had big plans, and we know that you're eager to see them come. Now, with YOUR help, we're ready to make that happen.

Part of our plan over the past few months has been putting together a process for brand new team members to help us make this big move for Toontown. We announced last month that we had brought on 5 new team members, and now we're going to be bringing on even more.

We have officially launched our Team Application Page, which lists all of the positions that we're looking to fill. Game Programmers, 3D Artists, Moderators, Video Editors -- you name it! We're looking for talented Toons like yourself who can become the Toontown Rewritten Team's future.

Our team is far from tiny, but over the years we have kept a fairly steady size. Toontown has grown, however, and it's time for our team to grow too so that we can continue providing you with the most Toontastic experience possible.

What are you waiting for? We've got to get back to work! The future of Toontown depends on YOU!

Ah, what a lovely morning! I may have only received two hours of sleep, but love will keep me going today! You see, I spent all last night writing a letter to the dog I love. It is ValenToons Day, after all. 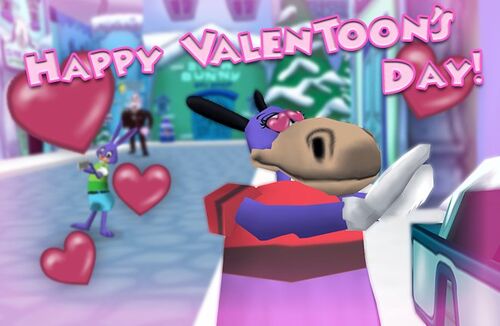 You know, Toons, I never felt that we did enough for ValenToons Day here in Toontown. There's plenty of lovely clothing in the Cattlelog, and it sure would be nice to throw a ValenToons Day party, but there's just something we're missing here... Can you think of what it is?

Now, I've heard the Toon Council has been a little silent lately as they work on expanding their team and finally completing some big projects, but that musn't stop us from showing support! For when the Toon Council does get around to it all... What kind of activities would you like to see during special Holidays in Toontown?

I have specific instructions to collect information from YOU Toons: What special events, games, prizes, contests, or even new ToonTasks could be given out for future Toontown holidays?

Give it some thought, and let me know in the comments! Stay Tooned to the news for upcoming excitement, as I assure you this dry spell won't last for much longer than a couple more days.

I must be off to deliver my love letter now. I certainly hope I don't bump into any of those nasty Cogs. Happy ValenToons Day, Toontown!

Retrieved from "https://toontownrewritten.fandom.com/wiki/News_Blogs_(2017)?oldid=78318"
Community content is available under CC-BY-SA unless otherwise noted.