"In my opinion, your name is mud."
―Name Dropper

A Name Dropper is the third Cog on the corporate ladder of the Sellbots. Their levels range from three to seven. They can be found in at least one street of every playground but are most commonly seen in Daisy Gardens. They can also be found in low and moderately high story Cog Buildings, and tend to appear quite frequently in the Sellbot Headquarters courtyard, as well as every battle in the Sellbot Factory and the first round of the Sellbot Towers boss battle.

A "name dropper" is someone who ostentatiously mentions the names of important people as if they were friends and associates, typically to inflate their own status. 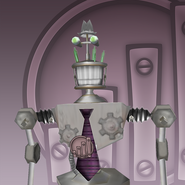 A level seven Name Dropper in Cashbot Headquarters during an invasion.

Name Dropper about to perform Rolodex. 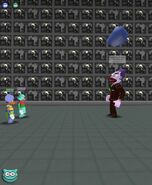 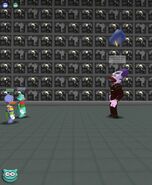 An encounter with a Name Dropper.