"Today, the role of the defeated Toon will be played by - YOU!"
―Mr. Hollywood

Mr. Hollywood is the eighth and highest Cog on the corporate ladder of the Sellbots. They normally range from level 8 to level 12; however, they can exceed level 12 in Sellbot Field Offices. They are among one of the building-only Cogs that appear in Cog Buildings, and can be found extensively in the facilities of Sellbot Headquarters.

Below are Merits required to obtain every promotion for each Mr. Hollywood level of the Sellbot Cog Disguise.

The term "Mr. Hollywood" defines an important person who persuades people into buying a product. 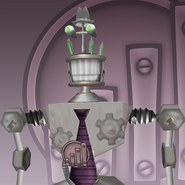