"Mickey has always been a humble hero of mine. I loved watching his movies as a tiny tot, and I knew that I needed to move into town just to meet him! I wanted to move in as soon as I could, but I was going through Tooniversity at the time to get my degree in Loony Literature and Animated Adjectives. A year later I earned the degree and submitted my application to be accepted as one of the first residents of Toontown. A few months later, I got a letter from Mayor Mickey himself saying he was astounded by my application and gave me a key to move in!"
―Flippy[src]

"The problem with this is that we overloaded ourselves by a tiny bit. By a tiny bit, I mean all of us are literally dead. Literally. Shockley ran away, McQuack threw a temper tantrum, and I forwarded my resignation letter to Alec, then blew off all of my Jellybeans at Disney World and came crawling back today. (Those hats are expensive, but no one can pass up on some Mickey Merch!)"
―Sir Max[src] 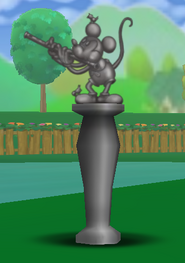 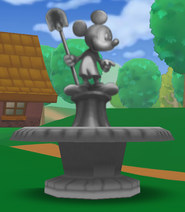 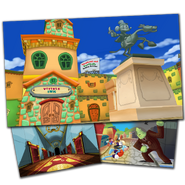 An HD version of the Mickey statue on Loopy Lane from the Toontown Retextured project still in development.
Add a photo to this gallery

Retrieved from "https://toontownrewritten.fandom.com/wiki/Mickey_Mouse?oldid=87012"
Community content is available under CC-BY-SA unless otherwise noted.