The Megaphone is the level two Toon-Up gag that is used to heal all other Toons in a Cog battle. Once a Toon earns 200 skill points, they will gain the Lipstick. It succeeds the Feather. 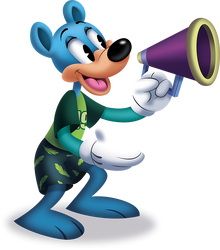 An illustration of Toontown YouTube creator, Kong, with a megaphone.
Add a photo to this gallery
Retrieved from "https://toontownrewritten.fandom.com/wiki/Megaphone?oldid=99659"
Community content is available under CC-BY-SA unless otherwise noted.