Mata Hairy is a monkey NPC Toon who helps Toons through the Chief Financial Officer battle. 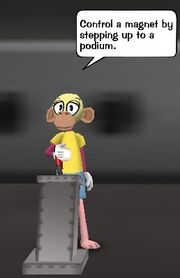 A bug where Mata would appear multicolored instead of red, her original color.
Add a photo to this gallery
Retrieved from "https://toontownrewritten.fandom.com/wiki/Mata_Hairy?oldid=97387"
Community content is available under CC-BY-SA unless otherwise noted.