"Good thing you're here, I'm in a frenzy."
―Loan Shark

A Loan Shark is the seventh Cog on the corporate ladder of the Cashbots. Their levels range from seven to eleven. They are among one of the building-only Cogs that commonly appear in Cog Buildings, and can also appear within the facilities of Cashbot Headquarters.

A "loan shark" is a moneylender who charges extremely high rates of interest, typically under illegal conditions. If the person does not pay back double the amount of money, the loaner will threaten and typically follow through with bodily harm. 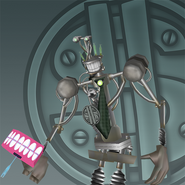 Loan Sharks invade Toontown with a Mega-Invasion during Shark Week.

The Loan Shark was the top-dog Cashbot of the final four in the top-dog Cog race.
Community content is available under CC-BY-SA unless otherwise noted.