"There is no limit to my talons."
―Legal Eagle

Legal Eagle is the seventh Cog on the corporate ladder of the Lawbots. They range from level 7 to level 12. They are among one of the building-only Cogs that appear in Cog Buildings, and can be found extensively in the facilities of Lawbot Headquarters.

Below are Jury Notices required to obtain every promotion for each Spin Doctor level of the Lawbot Cog Disguise.

A "legal eagle" is a slang term for a lawyer with great skill and determination. 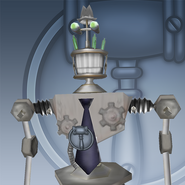